Watching one of my favorite sitcoms the other day, Seinfeld, I noticed something I never noticed before – I’m famous (well kind of). In season 9, episode 3, George Costanza (played by Jason Alexander) goes to work for his father selling PCs. In competition with a childhood foe, Lloyd Braun, George is upstaged in the sales department. Hearing a tape about stress reduction, George’s father, Frank Costanza (played by Jerry Stiller) mutters ‘Serenity Now’ throughout the episode in an effort to keep from loosing his temper. The drama of George working for his father, Kramer ruining his stash of machines, the competition from Lloyd, and the regular cast of characters made this episode a classic. Not to mention Elaine becoming a teen favorite on the Bar Mitzvah circuit. In the end, Lloyd makes an observation about the new mantra – ‘Serenity now. Insanity later’. They don’t make shows like Seinfeld anymore.

At one point in the episode there was a very heated moment when George and Frank are arguing using as a prop – a product I designed years ago while working with Microsoft – The Microsoft, Sidewinder Series, Game Pad. Its always fun seeing your work out in the wild. Especially on your favorite sitcom. 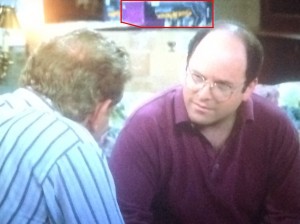